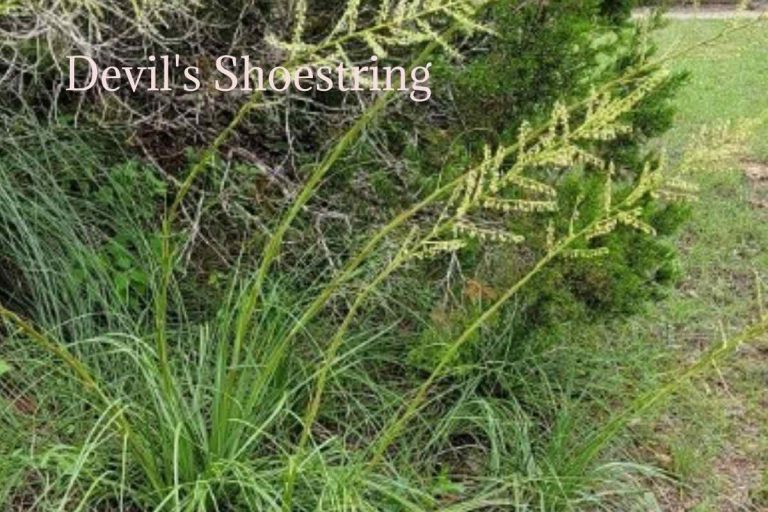 Devil’s shoestring is a common name for several types of viburnum, a plant that grows in North America and belongs to the honeysuckle family. Devil’s money is used in hoodoo.

The plant produces long vines that are used as protection to “stumble the devil” so that he cannot enter the house. They can be nailed into the ground near the front door or left on the door lintel.

Devil’s Shoestring is said to bring good luck against any kind of attack when you carry it with you.

Commonly used in Hoodoo sleight of hand, it is a multi-purpose herb that can be used to bring good luck for a new job, or to ‘trip the devil’ by warding off harmful energies.

Also, it can be placed in a bundle above a door or fireplace to protect your home. In the past, it was sometimes worn as an ankle bracelet to prevent “getting poison through the feet.”

What Is A Devil’s Shoestring? 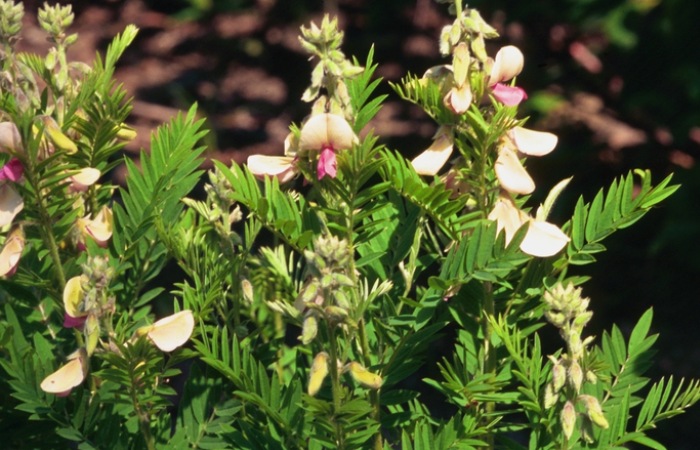 Devil’s Shoestring is a very potent weed of the Viburnum species known by many names such as hobblebush, moose bush, cramp bark, or Goat’s Rue.

It is commonly used in Hoodoo practices and is often stored in a medicine bag. This herb is native to eastern North America and can be found from northeastern Canada to Georgia. 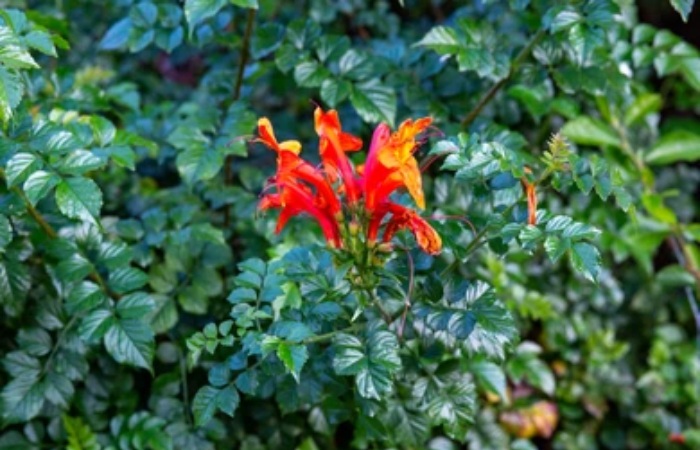 Common names tell their own story. Goat rue was fed to goats to increase milk production.

Therefore, it is no longer used as goat feed because it contains rotenone, which is now used as a pesticide.

It is also used as a fish poison, produced by affecting the roots. Another common name, Devil’s Shoestring, refers to its long, stringy roots.

This member of the pea family has upright or sprawling stems.

It is native to open, dry woodlands and is best grown from seed, as its deep root system means that division and transplanting are rarely successful.

Also, its upper petals are pale yellow, while the lower petals are pink. It begins flowering in the spring and continues throughout the summer.

Once the flowers have opened, the pods are formed. They can reach lengths of 3. 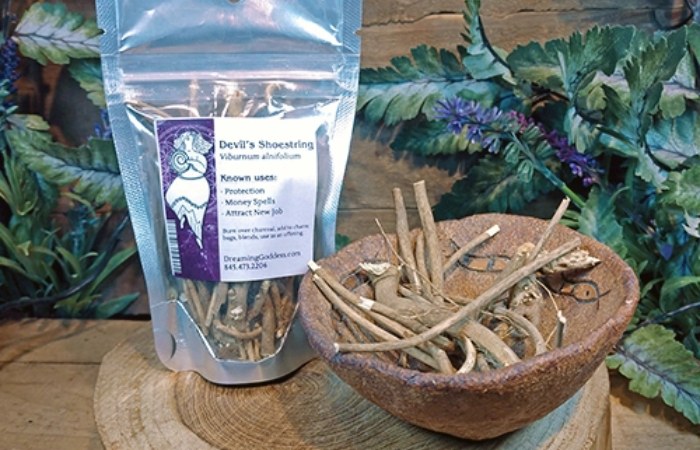 It is also called Hobblebush (because its sprawling branches can limp as you walk through the woods) or Moose Bush (because its large leaves turn brown in winter and look like a pair of moose ears), and is also known scientifically as Viburnum Lantanoides.

They all belong to the Honeysuckle family and, like honeysuckle, are used to magically bind.

The roots of these plants are long and flexible and are often very tangled, so they can trip the devil.

The third plant whose roots are known as Devil’s Shoestring in Hoodoo is Viburnum Prunifolium, and is commonly called Blackhaw.

It grows on the east coast and in the southern states of the United States, from Connecticut to Texas.

Since it is the only one of the three that grows natively in the southern United States, where Hoodoo originated, it makes the best case for being the “original” devil’s lanyard in Hoodoo.

There are a few other plants nicknamed Devil’s Shoestring, such as Goat’s Rue, Buckbrush, or Ribbon Grass in Texas.

Hence, it’s up to you if you want to use them magically, but you should keep in mind that these are not the Devil’s Shoestring used in Hoodoo. 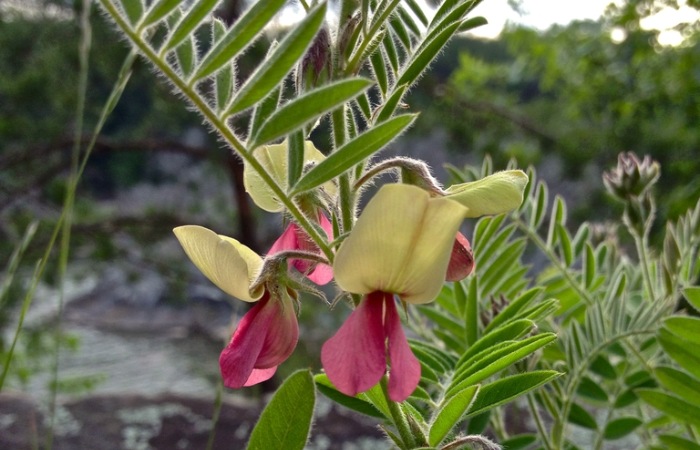 Devil’s lace flowers are polygamous-dioecious, that is: they usually have male and female flowers on separate plants, but each plant also has a few perfect flowers.

It favors limestone hills and ravines in lightly wooded areas of the eastern half of the Edwards Tableland where it is endemic (native to only one particular area).

The inflorescence is borne on a stout stem three or more feet above the mound of thin, flat leaves.

Also, the graceful leaves 12 to 36 inches long and 1/2 inch wide are minutely serrated along the margin. Its purple-tinged fruit, somewhat swollen, but rather thin, is notched at each end.

Therefore, in a landscape, devil’s lace would be an excellent choice as a focal point or ground cover for dry, shady locations in well-drained soil.

Naturally, fishing plays an important role in the lives of the Yuchi, who have almost always lived near the waterways providing fish in abundance.

The occurrence usually occurs in a location where cracks cause shallow water below and above a well-stocked pool.

Stakes are placed close together in the fractures to act as barriers to the passage and escape of fish. Bunches of roots are then thrown and people enter the water to stir it up.

This has the effect of causing the fish to surface, when the poison has had time to work, belly up, apparently dead.

They are then collected by men and women and carried away in baskets to dry for future use, or to be eaten at a feast that concludes the event.

The catch is divided equally among those present.

On one occasion, as soon as the fish appear floating on the surface of the water, the Indians jump, shout and dance exuberantly.

If a stranger arrives at this time, they are taken by the hand and presented with the choice of fish.

Also, as the plant fishing is removed, it can be cleaned and salted to preserve it, or grilled and eaten on the spot.

A favorite method of cleaning fish the instant it is caught is to remove the intestines with a hook through the anus, without opening the fish.

D evil’s shoestring is a genus of tropical xerophytic flowering plants, with the main distribution in Mexico and extending into the southern United States.

They are large dioecious plants.

Some botanists have included the genus Beaucarnea in Nolina. In the APG III classification system, it is placed in the family Asparagaceae, subfamily Nolinoideae (formerly family Ruscaceae).

Previous alternative locations include Nolinaceae and Agavaceae. The genus is named after the 18th-century French arborist Abbé C. P. Nolin.

Therefore, members of the genus are known as beargrasses, some of which are grown as ornamentals.

Review A Guide To Finding And Using The Devil’s Shoestring. Cancel reply